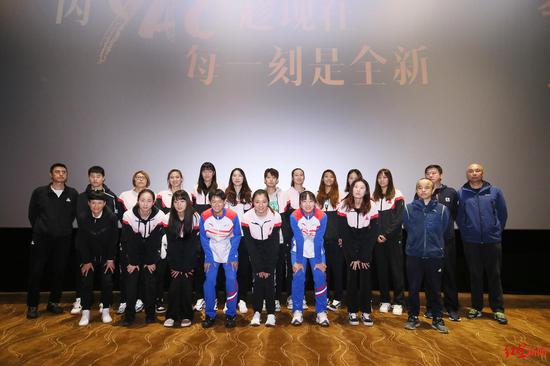 One of the hottest movies in the "Double Festival", "Win the Championship", may feel different for athletes in this industry, especially volleyball players. On October 10th, the Volleyball Management Center of Sichuan Sports Vocational College organized a special gathering for Sichuan women’s volleyball, men’s volleyball first-line and youth teams, Sichuan’s older generation of volleyball players, and fan representatives to watch this touching movie together. Experienced a "winning" moment.

In fact, for most athletes, this is not the first time they have watched "Win the Championship." A women's volleyball player bluntly said in an interview with reporters: "This is the second time I have seen it, but I still can't control the excitement, because seeing Lang Ping when he was young is really too hard! The spirit of the women's volleyball is for every player of us. Both have strong educational significance."

This special gathering of Sichuan volleyball people deeply moved the older generation of volleyball people who had created brilliant Sichuan volleyball. The Sichuan Women's Volleyball Team has won the second, third, fourth, and fifth National Games in a row, and won the National League A championship 5 times. During the five consecutive championships of the Chinese women's volleyball team, there were Sichuan players such as Zhang Rongfang, Liang Yan and Zhu Ling. In the heyday of the Chinese men's volleyball team, four of the six starters were Sichuan players, which also created the reputation of "no rivers can not be an army" in the Chinese volleyball world.

"Sichuan volleyball still has a long way to go, and there is a long way to go. The spirit of the women's volleyball team is easy to say, but how did the spirit of the women's volleyball team come into being? This is a slogan that requires effort and effort. I believe everyone can I feel what kind of spirit we need to do this business, and hope that Sichuan volleyball will return to glory as soon as possible." said Zhou Jianan, the former head coach of Sichuan Men’s Volleyball Team.

Zhang Shan, the "Old Gun" in Sichuan, who was appointed director of the Sichuan Volleyball Management Center on October 8 last year, has now "cross-boundary" in charge of Sichuan volleyball for a full year. This time, organizing a collective viewing of "Winning the Championship" may be her vision. "Science and technology have now been widely used in various sports training, but the women's volleyball team's hard training, hard work, and courageous spirit cannot be replaced by any science and technology. For ordinary audiences, it may be felt. It is a kind of spirit, but for volleyball players, it is a teaching film." Zhang Shan said.