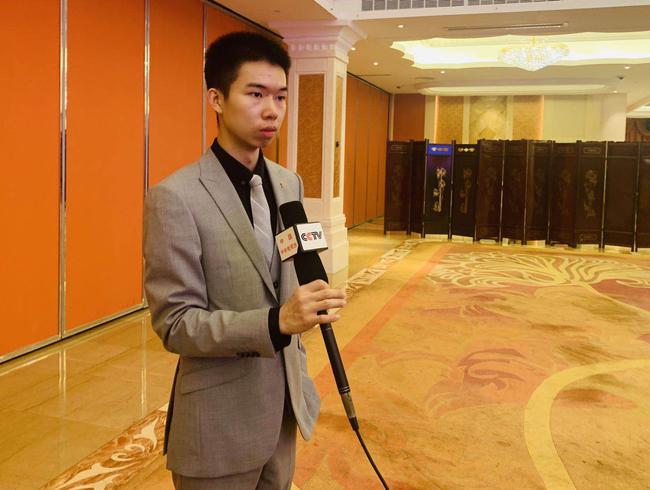 At 17:40 pm on September 24, at the Yongnian Pavilion of the Tenth Bureau Theme Park in Danghu, Pinghu, Zhejiang, Gu Zihao just beat Lianxiao in mid-game. The two made a brief replay, and after signing and taking photos with the local fans one by one, they hurriedly boarded the minibus and headed to the closing ceremony. Half an hour later, the closing ceremony officially began, and the champion and runner-up came to the stage to receive the award. Champion Gu Zihao took to the stage, holding a microphone in hand, and sharing his acceptance speech.

The thin and shy Gu Zihao stood upright in the center of the stage with a trophy in one hand and a microphone in the other. He is dressed in a light-colored hand-stitched formal suit, which is a very suitable version.

"I am very happy to come to Pinghu for the first time, but I think Pinghu is a city very famous for Go. In the ten games of Danghu more than 200 years ago, there was a good story about Go, which also brought a lot of Go culture to Pinghu. The bottom line. Today’s "Yongnian Pavilion" game finals at the Danghu tenth game theme park seems to have the same grand occasion as the "Danghu tenth game" back then. It feels very good. I look forward to coming again next time, and Yi has a good game!"

Previously, in front of a team of reporters, the Shinco TV Express Champion faced the camera and began to accept joint interviews from various media. He spoke in a small voice, but revealed a kind of decisiveness and determination.

first talked about the feeling of winning. Gu Zihao said that because of the epidemic, he did not come out for a long time and his emotions were also affected. Recently, there have been more games slowly resuming, and he has gradually recovered to his normal state. For the TV fast chess game, the previous games were all round trips, this is the first time I have come to Pinghu. I was very lucky to win the championship when I came here. I am very happy. It seems that this is a good place for me to transfer.

Speaking of today's final game, Gu Zihao thought that the situation was good in the first half, but he made a mistake in the lower right corner (the author's note: the upper left corner of the chess record, when White 54 moves), and felt that the situation was very tight after the set. However, the opponent didn't even come up with the strongest move at the end of the game. After breaking the black edge, he should always win.

Looking back on the history of winning this time, which chess game is the most thrilling? There was a slight smile on Gu Zihao's face: In fact, every game of this game was not easy. But although there are times when I feel that I am in a bad situation, I haven't reached the point of being completely endangered. Generally speaking, I played well in this fast chess tour and I am very happy to win the championship.

In what areas need to be improved? Summarizing the problems in chess, Gu Zihao said: I prefer to play fast chess. Speaking of the reason, because slow chess has a high physical energy consumption ratio, and can't eat at noon, will it ruin the stomach after a long time? It is also a concern. Such a secretly humorous answer made the surrounding reporters laugh.

Because of the tight time in fast chess, will you panic when you are unsure? He smiled: He used to be a little flustered, but now he is much more mature than before. Although there were some unexpected mistakes this time, there was no confusion in his heart. My shortcoming is that there are often problems in the judgment of chess, and I need to be strengthened most, and I hope to make more progress. Every opponent is very strong, and the opportunity is not easy. Play well and try to rush forward.

What do you think about the upcoming Asian Cup? Gu Zihao said that we must first do the things in front of us, train well at ordinary times, play well in the competition, and not think too much in the future, just seize the opportunity of the competition. Such simple and plain language, but with firm determination.

Looking at the world chess world, Shen Zhenzhen is a very strong opponent. As a Chinese chess player, he hopes that he will work harder and "not let him pass as easily as before."

"Try to rush forward." With such simple and plain content, the author felt a kind of belief and a kind of power in the close quarters. Although the voice of that sentence is as small as a light sniffing rose.